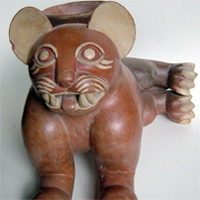 XXV Rassegna Internazionale del Cinema Archeologico
Italy | Trentino Alto-Adige, Rovereto and Trento | multiple venues
7th to 12th October 2014 | open every day from 10 am to 11 pm.
info +39 0464 452820 | www.fondazionemcr.it
The most important event of its type: the 25th edition of the Archeology Film Festival organized by our partner the Fondazione Museo Civico (Civic Museum Foundation) in Rovereto in collaboration with the review Archeologia Viva. For the Festival, FSP makes available to archeologists and fans of archeology, an exceptional find: a Mochica jaguar from Peru, dating from the I-V centuries. For five days in Rovereto, at the Auditorium Melotti: #auguriRassegna.

A jaguar of 2000 years ago: and still a mystery for archeologists.

A ritual cup in the form of an animal, a splendid object from the Mochica culture – the most refined and advanced pre-Inca civilization – from the Intermediate Antique Peruvian Period, between 100 BC and 500 CE.
A finely worked piece in the form of a cat (identified as a jaguar) lying on one side with upright head: an iconography typical of this culture but here of large size, which is according to our expert Valeria Mazzoleni, extremely rare in the panorama of Peruvian coroplastic art that produced mainly objects of smaller size.

During the inventory of the items to be conferred to the Fondazione Sergio Poggianella, in March 2010 we decided to use thermoluminescence dating, which showed the compatibility of the object with the period between 200 BC and 500 CE. Despite this and even though scholars have been unable to define the exact period of origin of the Mochica culture, the limits of this period are now considered to be between 100 and 800 CE. Flourishing along the northern coast of Peru, the Mochica culture appeared between the Pacific and the Andes, in the Lambayeque, Chicama, Moche and Viru Valleys: a region characterized by the presence of the desert. A farming and fishing society developed that was hierarchic and organized in classes. Their irrigation methods allowed large areas o be cultivated even in desert areas and they also developed metal working, using both simple and more sophisticated alloys for tools, weapons, jewelry and artwork.

Known above all for the treasure found in the Sipan tombs, the Mochica culture is strongly characterized by the production of ceramics, recognized for their quality and their smooth polished surface. They used an iron-rich clay and the objects are ochre with beige or very dark markings. Scholars today have differing opinions on the use of ceramics in the Mochica culture: initially thought to be used in funeral rites, having been found mainly in excavation of tombs, ceramics may have had a role as markers of identity and social status in daily domestic life, as well as in public festivities. No equally important examples are known: a similar item to our jaguar (differing from the more frequently found “bottle” shape with a stirrup spout and of small size) is in the Museum of Pre-Columbian Art in Santiago, Chile.

The jaguar is revered in this culture. One of the main Mochica divinities is Aiapaec or Aia Paec (aiapøk or a.ja.pøk, he who acts), the most feared and the most adored, also known as the Beheader (because he punishes) and the Creator (he protects and offers military triumph, as well as food and water).
Often indicated as the jaguar-god: the more frequent representation of the divinity – seen too in the wall paintings in the Temples of the Sun and of the Moon (Huaca del Sol e Huaca de la Luna), an archeological complex considered a Mochica sanctuary, on the north coast of Peru, five miles from Trujillo – having a feline anthropomorphic face with fangs, a jaguar in fact, and surrounded by the waves of the sea. Although Aiapec is represented in various ways, the recurring element is that of the jaguar’s fangs.
For this reason we can think that the representation of the jaguar in Mochica ritual cups is not by chance.

Best Wishes to the 25th yearly International Festival of Archeology Cinema in Rovereto!

To pay tribute to the event that for a quarter of a century has brought the world of archeology to Trentino, FSP exhibits for five days, from 7 to 11 October 2014, in the foyer of the Auditorium Melotti in Rovereto, the splendid Jaguar produced by the Peruvian Mochica culture.

An exceptional find for a festival that is an example for the number and quality of film titles presented by protagonists of archaeological research. In this edition the Festival is home to the Louvre Museum, some important film and international research institutes, Gedeon Programmes (a major film production company dedicated to science) and the Institute for preventive archeology (INRAP).

The richness of the program can satisfy many demands and can be seen from many points of view as well as the topics of "archeology and art" or "science and archeology", hosted with similar approach by the MART and MUSE museums in Trentino . In the many films we can see for example a thread that accentuates the musical aspect (particularly in final evening of Etruscan music), an adventurous path between the treasures of the Indian Ocean and the secrets of Angkor and a number of concessions to Egyptomania.

The Review also provides an opportunity to reflect on the history of the Jewish people, with two films and a conversation with Paul Salmone, director of the Museum of Art and History of Judaism in Paris. The event does not forget the Great War Centenary, evoked by remains emerging from the Forni glacier in the Ortler -Cevedale mountain range, as documented by the film Punta Linke - The Memory in the afternoon. The red thread of conflict develops with footage from Syria, Middle East and Pakistan.

The Italian investment in culture, always a topic for lively debate here, welcome guests will be the former Minister of Cultural Heritage Massimo Bray and the archaeologist Giuliano Volpe, former president of the Italian Council for Cultural Heritage and Landscape.

Saturday, October 11, will be the closing day with the evening dedicated to awards.

On Sunday 12th October, in the Fondazione Museo Civico di Rovereto conference room, the Festival will be showing films that won, in previous editions, international prizes awarded by juries or by public vote, now in the library of the Louvre.

Detailed program information on the web page of the XXV International Festival of Archaeology Cinema.