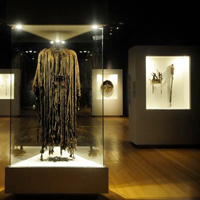 The most important exhibition that Latin America ever dedicated to work by Kandinsky.
Thanks to a co-production by the Centro Cultural Banco do Brasil (CCBB) and some Russian Museums, the artist who started the Abstract Art movement will be shown to and can involve the public in his world. FSP also takes part in the initiative: 35 shaman objects will tell of the origins of the Abstract in Kandinsky’s art. #KandinskyCCBB

“This exhibition brings here a precious selection of work never seen anywhere in the world in this type of event”, declared the coordinator of the show, Rodolfo Hatayade. Some rare work by Wassily Kandinsky is shown, dating from the Twenties, when he started his career; and is of great interest due to the implications of the juxtaposition with Russian popular art and shaman ritual objects, two fields that strongly influenced Kandinsky’s research towards Abstract Art.
A new type of event for Brazil and all Latin America: with curators Eugenia Petrova and Joseph Kiblitsky, the exhibition includes work mainly from the Russian State Museum in St Petersburg and other Russian museums, but also from private collections in Germany, Austria, England and France.

The exhibition is organised in sections that illustrate the artist’s career, his origins and development. A first section illustrates the relationship between popular culture and folklore in Russia, that body of legends and tales that feed the artist’s imagination. In the next section, the theme is that of the influence of the spiritual universe and of the aesthetics of shamanism with which Kandinsky – whose family was from Siberia – makes contact via the Sirien people: this section thanks to collaboration with the Sergio Poggianella Foundation that has lent 35 shaman ritual objects. A further section is based on the theme of the movement Der Blaue Reiter (The Blue Rider): here the contribution offered by the Arnold Schönberg Foundation was fundamental, illustrating research into the connection between sound and colour, stimulated in Kandinsky by the Austrian composer’s dodecaphonic music. Another exhibition space is dedicated to interactivity: using 3D glasses, we can see the works in a play of breakdown and re-composition of the image, helping to see and understand the complexity of Kandinsky’s painting. A video made for this exhibition reconstructs the life of the artist and explains his colour philosophy.

For Rodolfo Hatayade, Kandinsky “was one of the first to develop a theory of colour, opening the way to art where a painting is other than a simple representation of reality”.
The exhibition is promoted by the Centro Cultural Banco do Brazil for the twenty-fifth anniversary of the Bank’s foundation, and will make successive appearances in major Brazilian cities: