Rovereto, from 27 March to 2015 at Palazzo Alberti Poja, the initiatives "Confini e Conflitti / Borders and Battles" 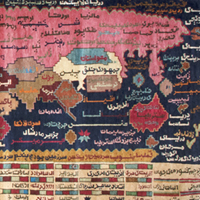 Borders and Battles. Pictorial Oriental Carpets. A Vision of Power
Italia  |  Trentino, Rovereto  |  Palazzo Alberti Poja
from 27 March to 11 October 2015
info www.mostraconfinieconflitti.it
A travelling exhibition with a catalogue in Italian and English, didactic workshops for Schools, academic research and many collateral events.
War Rugs, carpets made in Afghanistan in time of war – but also in Pakistan and Iran where there are many Afghan refugees – stimulate reflection, beyond any historic, artistic or aesthetic narration, into the pressures on borders of the World’s countries. #mostraconfinieconflitti

The exhibition «Borders and Battles. Pictorial Oriental Carpets. A Vision of Power» is promoted and produced by the Sergio Poggianella Foundation, by the Civic Museum Foundation, Rovereto and by the Letters and Philosophy Department, Trento University; and also in collaboration with the Trentino Peace and Human Rights Forum, the International Peace Day – UNO and the Aldo Mondino Archive.
With Sergio Poggianella as creator and curator and Elena Dai Prà as science director, the exhibition has the patronage of: the Regione Autonoma Trentino-Alto Adige, Provincia Autonoma di Trento, Comune di Rovereto, AGeI Association Geografi Italiani, AIC Association Italiana Cartografia, AIIG Association Italiana Insegnanti di Geografia, CISGE Centro Internazionale di Studi Storico-Geografici, Società Geografica Italiana, Società di Studi Geografici, IPRASE Istituto per la Ricerca e la Sperimentation Educativa and Società Museo Civico. Drawing on a collection of two hundred figurative oriental carpets (belonging to the Sergio Poggianella Foundation), the intent is to plot a course that can document their many types and illustrate the topics and questions for research into Afghan War Rugs. Most of these rugs are knotted, but some are woven and embroidered. They are produced mainly in Afghanistan (but also in the Pakistan NWFP, where production is active, and in Iran where today there are still three million Afghan refugees), as well as in Central Asia and in China. Among the many subjects, World and Afghan maps with State flags, political and thematic maps, landscapes and portraits of famous people; with or without weapons and armaments.

These carpets had great success on the market in the period between the Soviet invasion of Afghanistan (1979-1989) and the Enduring Freedom mission (2001-2006), well beyond the Afghan borders. Their origin however still needs to be researched, as this production is a complete break from the traditional oriental carpet. We remember that almost a century ago in nearby Khotan, carpets had already begun to show the first signs of a modernist revolution, with the appearance of cityscapes with speeding trains, ships and aircraft. While true that in War Rugs there is a fascinating and rich range of images, often revealing extraordinarily creative and artistic personality, it is also clear that the rugs and their authors were often the victims of interpretative clichés and historiographic voids. We cannot ignore that this repertory of “visions of power” presents more or less intentionally the relationships of power and strength among the States of the World, offering a historic and geographic record of Afghanistan and the Afghan people, subject to war for more than a century. For the Great War Centenary we think this itinerant exhibition should start its travels from Rovereto and Trentino: this was a home to Italian patriots, but part of Austria, and is now a land representing «an ideal of peace, respect for man, of union for all the world’s peoples». Here in 1815, a line in ink a little too far South on a map was not enough give any sense of “belonging” to the Tyrol and the Austrian Empire, a border was not enough to want to fight against Italians. Trentino and Rovereto, in the Great War that altered the history of Europe, were at the front, the line on a map where the armies fought. Trentino and Rovereto, still today guarding dramatic memory of borders and war, host the initiatives in «Borders and Battles. Pictorial Oriental Carpets. A Vision of Power».

We underline this by placing, alongside War Rugs in the exhibition, contemporary work by Vittorio Corsini, Andrea de Carvahlo, Federico Lanaro, Aldo Mondino and Sarenco: artists of various generations and languages who interpret the carpet within the themes of war, power and religious dialogue.

Thanks to the collaboration with our partners in this project, we are creating many chances for visitors of all ages to meet and share experience and learning of the many facets to a culture of peace. A border is a convention that separates and divides, but at the same time creates belonging, guarantees protection; while war desecrating the border, violates identity.
«Borders and Battles. Pictorial Oriental Carpets. A Vision of Power» does not want to desecrate borders, but cross them to explore and share space and culture.